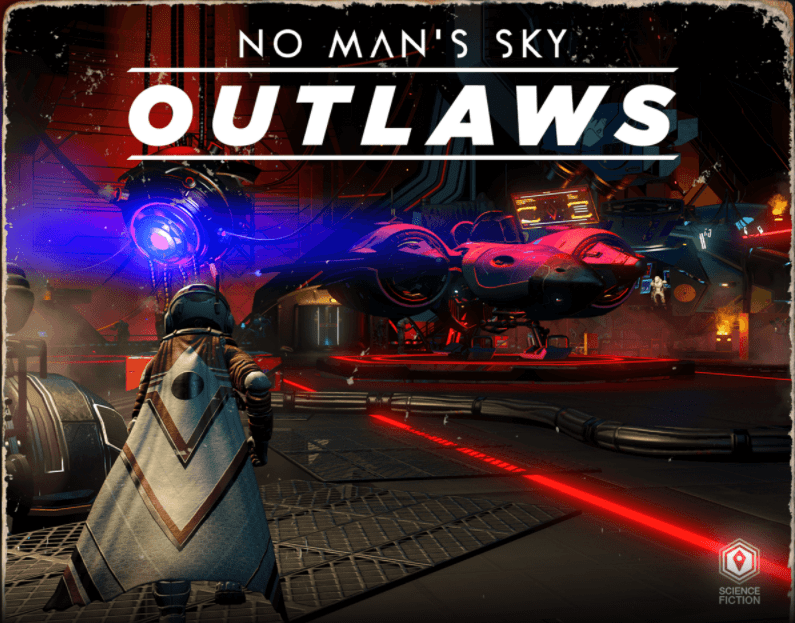 The latest update for No Man’s Sky dropped today and it is called “Outlaws”. Version 3.85 is the 140th official update from Hello Games and the 10th update within the “Origins” iteration (Version 3.x).

“Outlaws” introduces a variety of miscellaneous patches, a new starship type equipped with solar sails, outlaw systems with rebel space stations, wingman starship recruitment and much more. They even added some minor, but fun content, like hoods & capes with realistically-simulated cloth physics.

You can read the full patch notes here.

On the Portal Repository I’ve updated the version tagging for newly-submitted portal addresses for version 3.85, as well as adding two new tags: 1) Outlaw System 2) Solar Ship. When submitting a new portal address these new tags are available to select under the “System Name” field and in the “Ships, Multitools & Others” section, respectively. 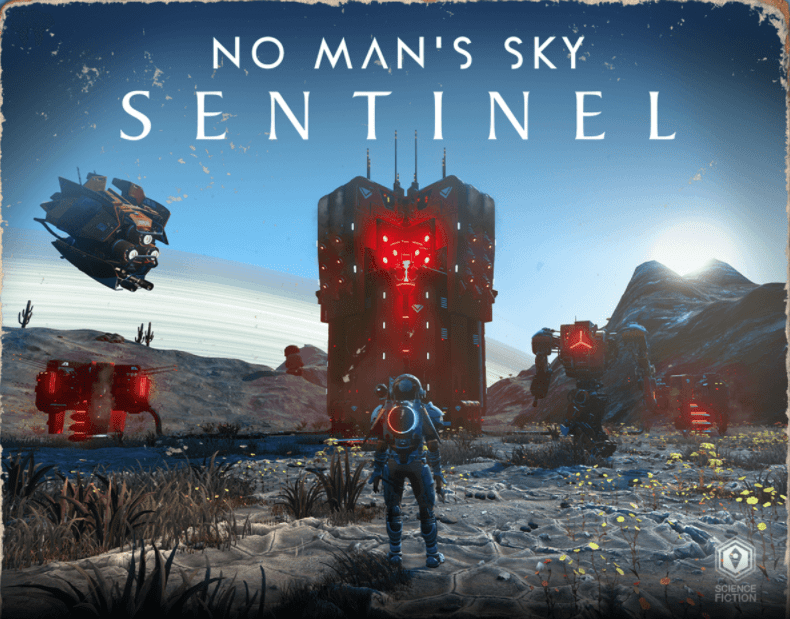 The latest No Man’s Sky update has been released and it is titled: Sentinel. This update focuses heavily on combat mechanics related to the sentinels and introduces a number of new features and improvements to the Exomech. You can read the full patch notes here. 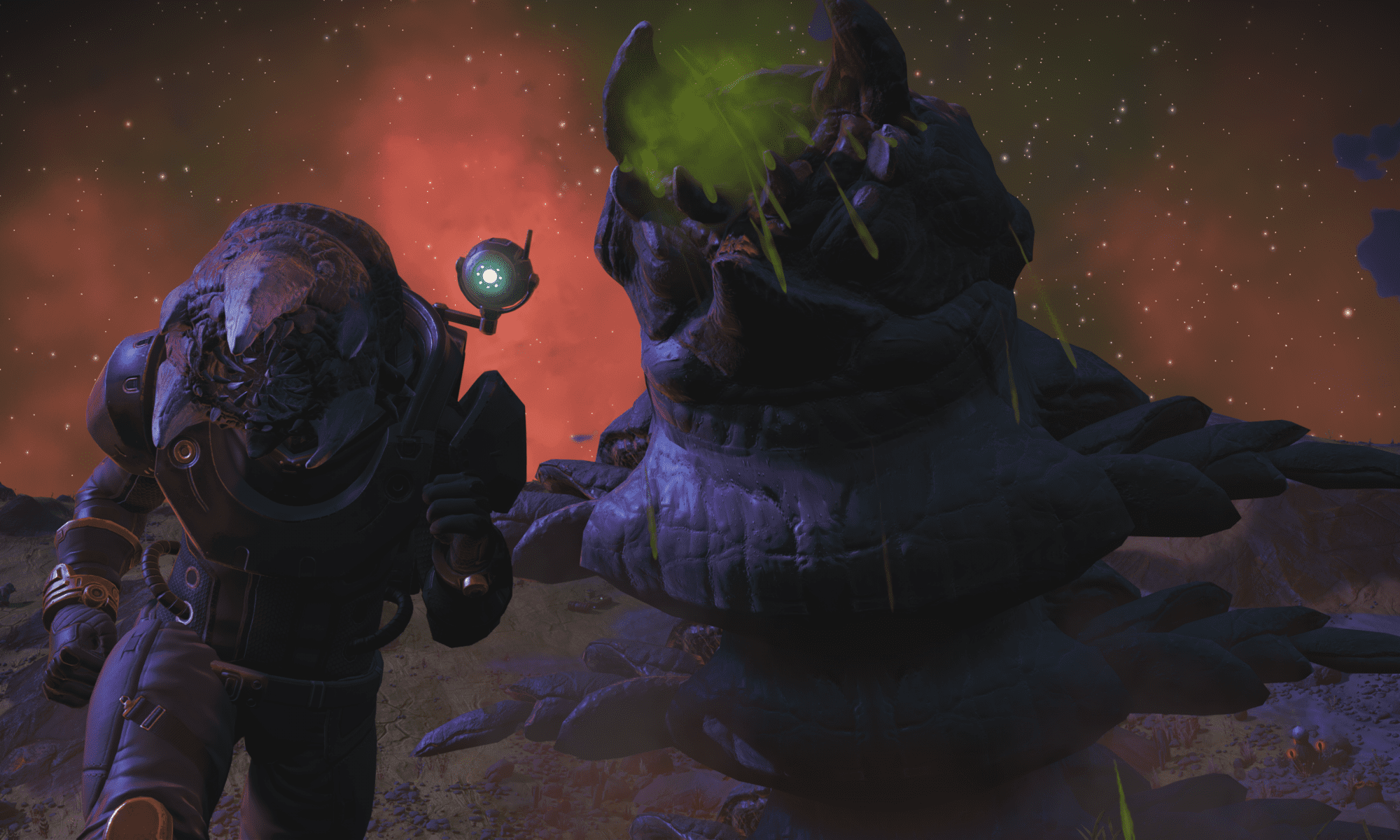 Click here to read the full patch notes on nomanssky.com

Also, don’t forget that The Portal Repository already has a “Sand Worm” tag that you can use to search for portal addresses with sandworms: https://portalrepository.com/tag/sand-worms/ 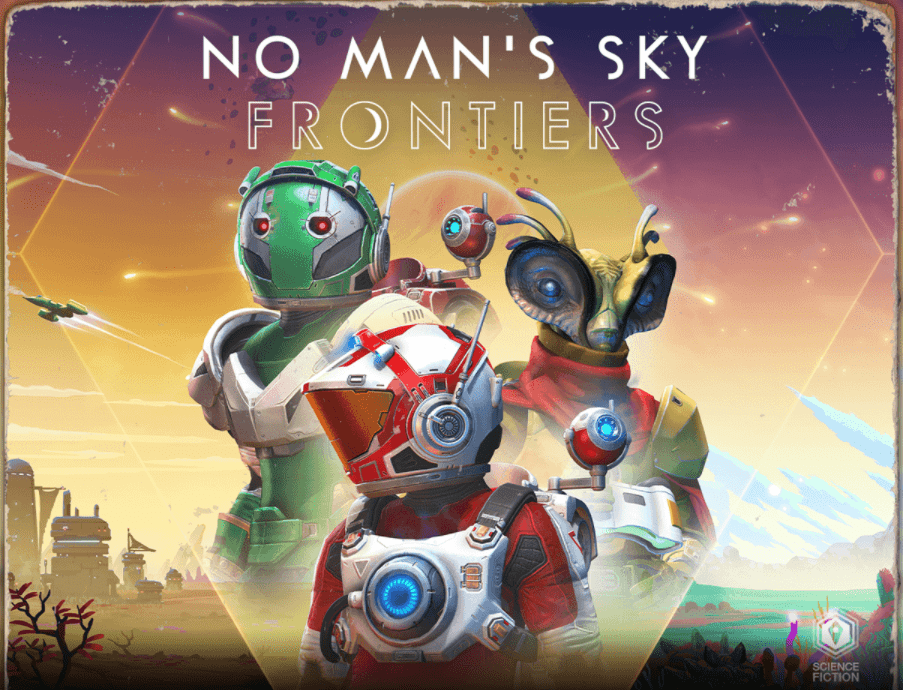 The latest No Man’s Sky update has finally arrived and is called Frontiers!

You can read the full patch notes from Hello Games here.

Among all the changes in this new release is a new game feature called “Planetary Settlements” which are NPC towns that players can manage and control. Currently it seems that players can only control one settlement at a time, and settlements are essentially treated like player bases (only one player can control a single settlement). For more information about Planetary Settlements keep an eye on this wiki page as the community starts exploring this new game feature!

The Portal Repository website has been updated to reflect the new version number and the new tag “Settlement” has been added as well. When you submit a portal address simply select the number of players that control settlements on that particular planet. The “Settlement” tag will be added automatically. The portal address metadata table will also display the number of player-controlled settlements.

Finally, a new quick link for Settlements has been added to the homepage. The quick link will take to you to “Settlement” tag archive page. 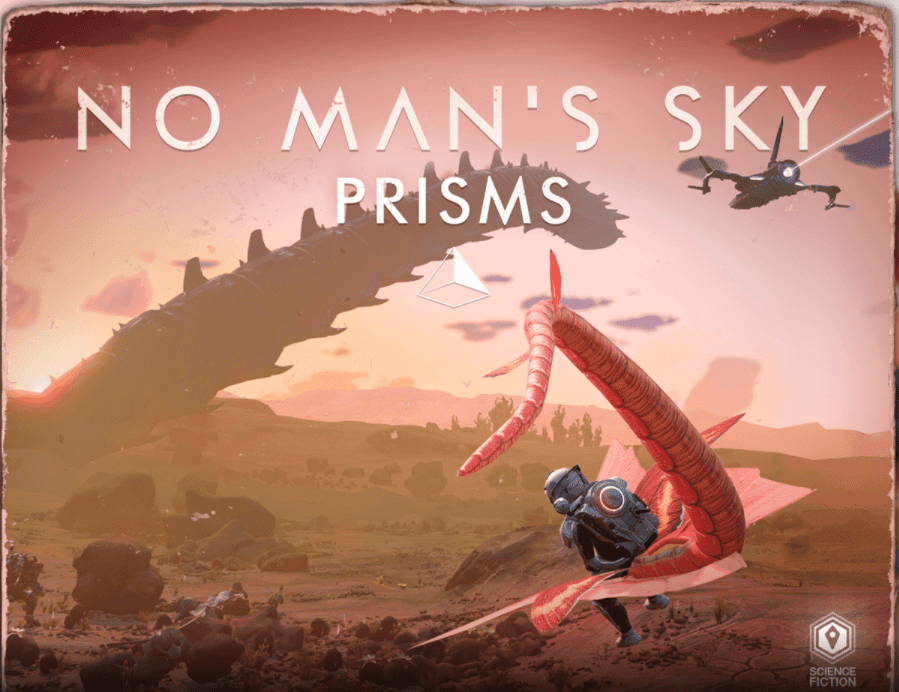 The Portal Repository has been updated to reflect the newly-released update, version 3.5 Prisms. Read the official patch notes here and watch the trailer below: 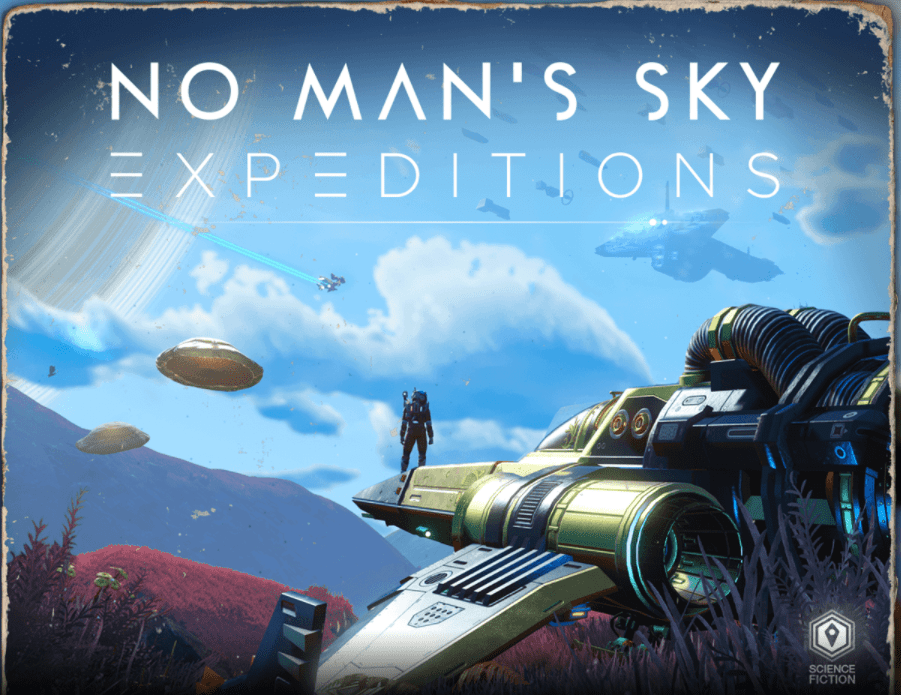 The latest version of No Man’s Sky has been released today and is titled Expeditions. This release introduces a new seasonal game mode with exclusive limited-time rewards, miscellaneous rebalancing, performance optimizations and various bug fixes.

One major change in Expeditions is that the various platform-based discoveries databases has been unified. This means a named discovery on PS4 will now be the same on other platforms like Xbox and PC. If a discovery was previously-named on multiple platforms then the oldest discovery will take priority. This is a pretty substantial change that is likely to have repercussions for player civilizations that occupy the same regions on different platforms.

Another major change is that base uploads are now fully cross-platform compatible. Players can visit any other uploaded base, even if the base was uploaded on a different platform. Presumably base uploads are still restricted by game mode, so bases built and uploaded in Creative mode still won’t be visible to players in Normal mode, for example.

You can view the Top Ten portal addresses page to find some of the most popular portal addresses among the community submitted during the various 3.x Origins versions. Addresses published in previous versions of version 3.x Origins (Halloween, Next Generation and Companions) will have a warning notification banner appended to inform players that the discovery names and player bases might be different.

The new game mode “Expedition” has been added to the portal address submission form. Likewise, the new version tag has been created and will be automatically applied to new portal addresses submitted from today onward. Now that it doesn’t matter what platform players are using I will create some new quick links on the site to quickly list all the bases in a certain galaxy by game mode (all bases in Euclid in Normal mode, for example). This should make searching and filtering for desired locations a bit easier.

Please leave a comment if you have any other suggestions for changes on The Portal Repository website.

No Man’s Sky FM is an online radio station that features player-made ByteBeat songs. Like most radio stations, NMSFM includes “advertisements” between segments. Some of the ads are for legit community groups like the Amino Hub and YouTube channels, other ads are just funny fictional bits.

I am looking for someone to write up and/or record a radio ad for The Portal Repository. Feel free to use your imagination and be creative. The only requirements are that the ad include the name “The Portal Repository”, the URL “portalrepository.com” and can be read in 30-60 seconds. Send your submissions to [email protected] Submissions are due by March 31st. Preference will be given to audio recordings, but text write-ups will also be considered.

In addition to having your ad aired on NMSFM you’ll also have the chance to win the following prizes:

2nd Place: Partner status on The Portal Repository (name listed in the footer, addresses featured on the Homepage, ad-free experience while logged-in)

1st Place: Stakeholder status on The Portal Repository (name listed in the footer, addresses featured on the Homepage, ad-free experience while logged-in, and your choice of any TeeSpring merchandise!

I’d also encourage anyone who enjoys NMSFM radio to make a donation to the broadcaster: Donate to NMSFM

A new update has been released today for No Man’s Sky: Version 3.2 Companions!

This update introduces new gameplay involving creatures that can now be adopted as pets. Read the full release notes: here.

As usual, the Portal Repository has been updated for this new version. Starting today, newly-submitted portal addresses will now be marked with the tag “Version: 3.2 Companions”. Also, the Top Ten Addresses page has been modified to include addresses submitted in versions 3.1 and 3.2. A bug was discovered that prevented “Next Generation” addresses from being included in the Top Ten list.

The Portal Repository needs your support to stay online! This website is ran exclusively by me, HusbandVader. I personally pay all the costs associated with hosting, domain name registration and maintenance. This website is a passion project of mine since 2017 and I’m honored that thousands of NMS fans visit every day to find and share portal addresses with the community. If you enjoy using this site please consider supporting it for as little as $1/month on Patreon.

Watch livestream: No Man’s Sky has been nominated for Best Ongoing Game and Best Community Support! 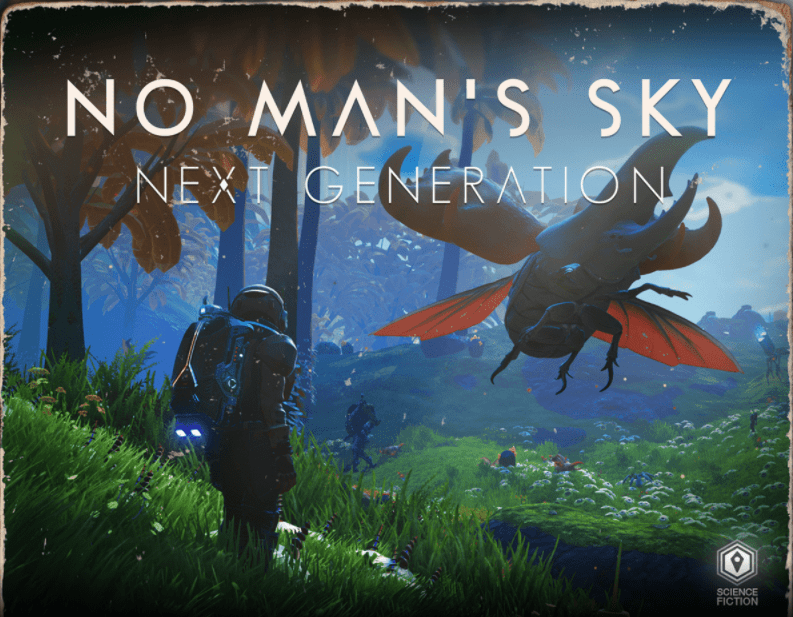 Following hot on the heels of the Halloween update, Hello Games have announced another update called Next Generation! This update is scheduled to be released on November 10th to correspond with the launch of the next-gen Xbox and PlayStation consoles.

Next Generation brings compatibility for new console players on the next generation of PS5 and Xbox Series X/S. Additionally, PC players with “Ultra” settings will also benefit from the improved visuals and graphical enhancements.

The full patch notes can be read here.

Here on The Portal Repository I’ve made some changes to support this latest update:

If you think there are additional changes that should be made on The Portal Repository to support this latest version please leave a comment below.

Wait, Before You Go!Can you support this site for only $1/month?

If you're passionate about No Man's Sky and can spare $1/month please consider becoming a Patron supporter today!

Patreon supporters are listed in the website footer, have their addresses published on an exclusive page, receive an ad-free experience and won't see this pop-up (while logged-in).

No, I don't want to support this site.

This website uses cookies to improve your experience while you navigate through the website. Out of these cookies, the cookies that are categorized as necessary are stored on your browser as they are essential for the working of basic functionalities of the website. We also use third-party cookies that help us analyze and understand how you use this website. These cookies will be stored in your browser only with your consent. You also have the option to opt-out of these cookies. But opting out of some of these cookies may have an effect on your browsing experience.
Necessary Always Enabled
Necessary cookies are absolutely essential for the website to function properly. This category only includes cookies that ensures basic functionalities and security features of the website. These cookies do not store any personal information.
Non-necessary
Any cookies that may not be particularly necessary for the website to function and is used specifically to collect user personal data via analytics, ads, other embedded contents are termed as non-necessary cookies. It is mandatory to procure user consent prior to running these cookies on your website.
SAVE & ACCEPT