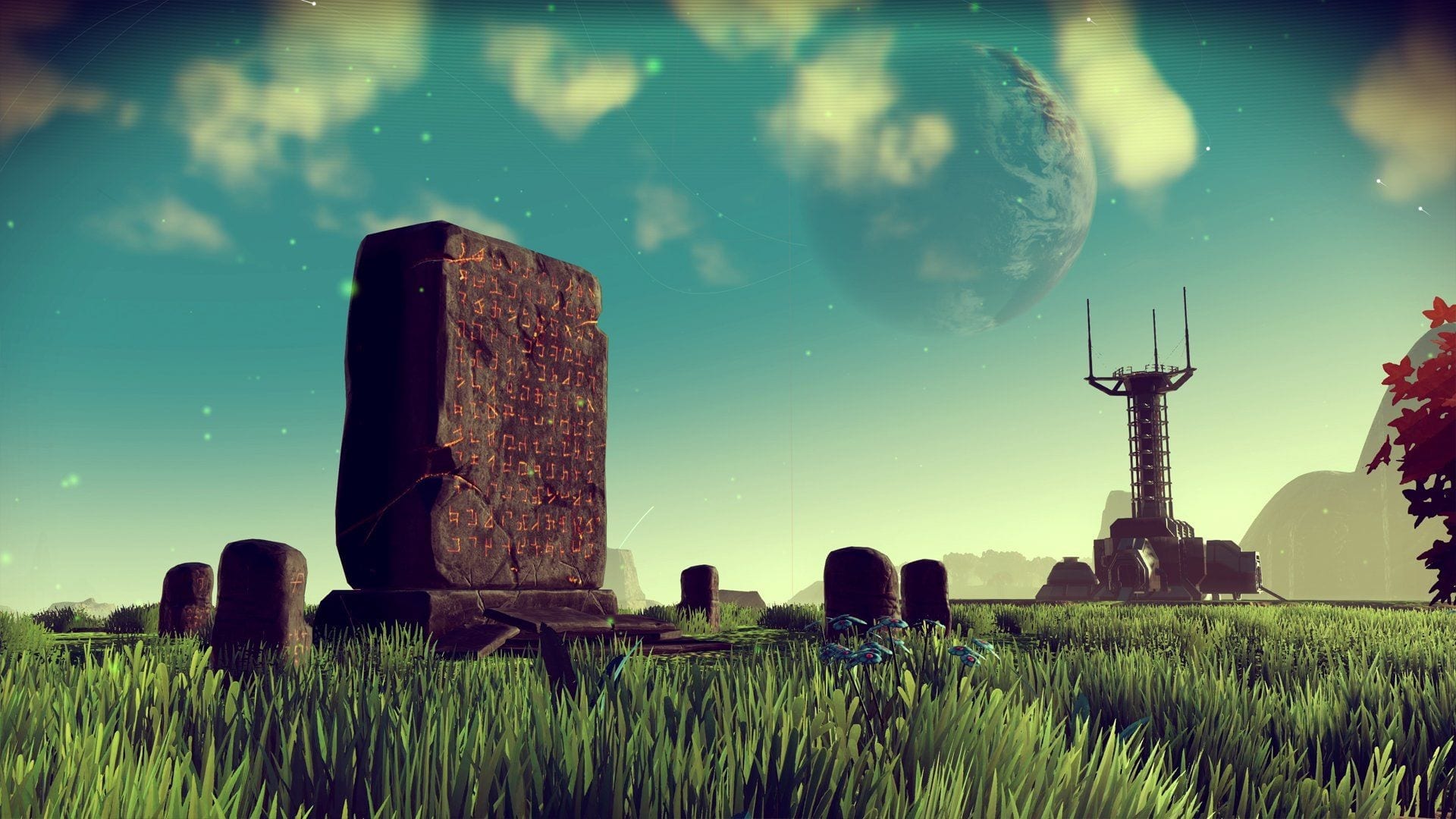 Awake and witness creation! The Beyond takes us in an instant. The cycle continues but our time here is brief. The galaxy is our burden. Things fall apart because entropy holds.

Ever since portal glyphs were introduced into No Man’s Sky there has been much debate in the player community on what to call each glyph. During the Waking Titan ARG the 16 portal glyphs were slowly introduced through a series of puzzles, but in the end we were never explicitly told what the name or meaning of each glyph was supposed to be.

This lack of information from Hello Games has left the community to fill in the blanks. Immediately after the Atlas Rises update came out players started coming up with all sorts of different naming conventions for all the glyphs, mostly based on what they looked like. For example, the first glyph

has been called by several different names: water, sunset, sunrise, hamburger, etc. But all of these names are highly subjective perceptions of what different players think the glyph visibly represents. Eventually Reddit conducted a community vote to determine the glyph names. Although the hexadecimal glyph format is more practical and popular, wouldn’t it be nice if we had official insight from the actual creators of No Man’s Sky as to what each glyph meant?

Not satisfied with the community-approved glyph names I set out to find the meaning of the glyphs using in-game sources. In No Man’s Sky there are four different languages that players can slowly learn: Gek, Vy’keen, Korvax and Atlas. The words in each language are learned in a fixed order. I compared the 16 glyphs with the first 16 words of the Gek, Vy’keen and Korvax, but saw very little correlation. However, when I compared the glyphs to the first 16 words of the Atlas language the correlation was almost undeniable.

Now that we’ve established the correlation between the Atlas language and the glyphs, let’s delve deeper into the meanings.

Awake: Visually this glyph does appear to be the sun positioned half-way over a watery horizon. This could be interpreted as a sunrise, which is traditionally associated with waking up. When we start a new game the first thing we do is “wake up” next to our crashed ship on an alien world.

Witness: Commonly referred to as the “bird” glyph. A witness is someone who has seen an event. Since birds fly high above the surface they get the “bird’s eye view” which correlates nicely with the word “witness”. After we start the game and we initially “wake up” the next thing we do is look around and witness our surroundings.

Creation: This glyph has several different interpretations, most commonly known as face or faces. Continuing with the previous glyph themes of waking up and looking around, the next thing we do is take personal inventory, we become aware of ourselves, our life support, our hazard protection, etc. Likewise, after we wake up and witness our surroundings, we become aware of the creation of the simulated universe in which we explore.

Beyond: Although this glyph is often referred to as the “diplo” it could be interpreted in a more broad sense to represent the flora and fauna that we scan and discover. After waking up, witnessing our surroundings and the creation of the universe, we then move beyond the world from which we initially awoke.

Instant: This glyph is commonly understood to represent an eclipse, which is a precise event where one celestial body temporarily obscures the light from another. In celestial time-scales this event could be understood to be only a brief moment, or an instant.

Cycle: Some people see this glyph as a balloon or a waypoint marker. If we interpret it as being a balloon of sorts we understand that it spins (cycles). In a broader sense, we could also envision the motion of a floating balloon to be subject to the influences of a planet’s atmosphere, which is cyclic.

Continues: This glyph pretty clearly shows a ship, boat or vessel. Seeing that the purpose of a vessel is to travel, the meaning of continuing on our journey is a fairly reasonable interpretation.

Time: Although most people see a beetle or spider in this glyph the representation of “time” could be understood on a more symbolic level. Time having 3 major components, the past, the present and the future. This glyph shows two legs pointed upwards (future), two legs pointing straight to the sides (present) and two legs pointed downwards (past).

Brief: Commonly called the “dragonfly” glyph, the tail of the dragonfly evokes imagery of movement. Being some sort of flying winged insect its motion would be quick, giving observers only a brief glimpse before it flew away.

Galaxy: Perhaps the most obvious correlation between the player glyph names and the sequential order of the Atlas language. This glyph is broadly interpreted by players to be a spiral galaxy, like our own Milkyway. It also just so happens that in the Atlas language dictionary, the 10th word is also “galaxy”. Coincidence? I think not!

Burden: This hexagonal-shaped glyph wasn’t easy for players to name. Ultimately Reddit users settled on the word “voxel” to describe it, however perhaps the Atlas word “burden” more accurately represents the intangible nature of this glyph’s meaning. A hexagon is understood to be nature’s most efficient shape. You can pack many hexagons closely together without wasting space. The dot inside one of the wedges may symbolize something being stored inside the hexagon. Using hexagonal containers would permit efficient transport, even when heavily laden (burdened).

Things: Unfortunately the Atlas word doesn’t make a great correlation to what appears to be a whale or a fish glyph, although in the most generic interpretation, whales and fish are just “things” in the sea.

Fall: This 13th glyph seems to represent a tent or teepee. A tent being a ground-based shelter, it could be understood that when one “falls” from the sky you must erect a shelter on the planet’s surface to protect you from the elements.

Apart: Visually, this glyph appears to be some sort of spaceship or rocket. The purpose of a spaceship or rocket is to take you into space. Space being (essentially) a vacuum puts you “apart” from everything else in the universe.

Entropy: In the most general terms, entropy is an irreversible process (increasing disorder or chaos). This glyph starts as a single line on the bottom and appears to branch out at the top, visually representing increased chaos from bottom to top.

Holds: Players typically call this the “Atlas” glyph because of the similar triangular shapes, however it could just as easily be perceived as the representation of “containing something securely”. The three outer triangles are positioned to securely hold the inner triangle.

I fully acknowledge that some of the glyph interpretations are a bit of a stretch, however sometimes the visual representation of an intangible concept or idea can be tricky. Also, it’s important to remember that it’s entirely possible that Hello Games didn’t intend for there to be any correlation between the portal glyphs and anything in-game. Maybe they wanted the glyphs to remain open to interpretation. On the other hand, maybe there are some deeper meanings that they wanted us to find on our own. What do you think?

Wait, Before You Go!Can you support this site for only $1/month?

If you're passionate about No Man's Sky and can spare $1/month please consider becoming a Patron supporter today!

Patreon supporters are listed in the website footer, have their addresses published on an exclusive page, receive an ad-free experience and won't see this pop-up (while logged-in).

No, I don't want to support this site.

This website uses cookies to improve your experience while you navigate through the website. Out of these cookies, the cookies that are categorized as necessary are stored on your browser as they are essential for the working of basic functionalities of the website. We also use third-party cookies that help us analyze and understand how you use this website. These cookies will be stored in your browser only with your consent. You also have the option to opt-out of these cookies. But opting out of some of these cookies may have an effect on your browsing experience.
Necessary Always Enabled
Necessary cookies are absolutely essential for the website to function properly. This category only includes cookies that ensures basic functionalities and security features of the website. These cookies do not store any personal information.
Non-necessary
Any cookies that may not be particularly necessary for the website to function and is used specifically to collect user personal data via analytics, ads, other embedded contents are termed as non-necessary cookies. It is mandatory to procure user consent prior to running these cookies on your website.
SAVE & ACCEPT